..we awoke to a very brisk and breezy day. I wore long underwear under my Kerrit riding pants, which I wore under my grey sidesaddle suit..and I was still shivering. I wore this suit the last time I showed, but this time I would wear it with a corset, thus giving it a nicer shape and I opted to put my chemesette under it. I loved the way it looked! 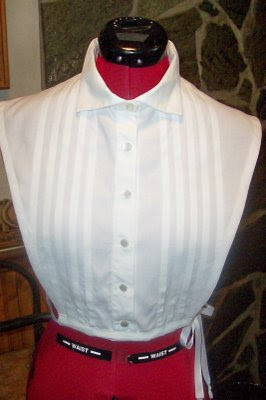 The chemesette, made for me by Cindy of Wild Horse Fashion, gave the look of a full blouse under the jacket, but since it does not have sides, sleeves or long tails, there is no bulk to deal with.

Picture will be inserted later.

I caught a ride from the hotel to the show grounds with Sandy to give Don more time to get going. I tend to get 'snarky' if I think he is going to make me late for something.

As Sandy started to get the horses ready, I walked down to the show office to get a class schedule. I would be showing two times this day, once in the morning and once in the afternoon. The morning class was Country Pleasure and there would be 9 in my class...NINE. In this class I wore my black derby.

It was no secret that the horses were wound up. The cool temperatures combined with their newly shaved bodies added up to a lot of commotion back in the barn area. Oliver was just as excited, if not even more than most. Sandy knew this and had him saddled up right away. She climbed aboard and took him into the practice arena while I continued to get ready. I assumed that she was gone for a long time because she was demanding that he flat walk for her... 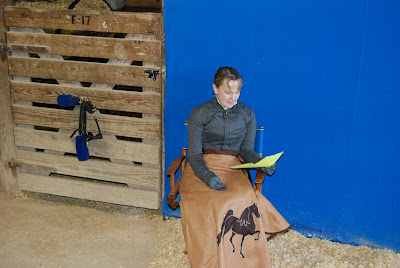 I was wrong, but Sandy was smart not to tell me what had happened until I was done riding.

As Sandy rode Oliver back up the barn isle, the grooms started to wipe him down. He had sweat on his neck. I climbed onto the tack trunk and then atop the second step of the mounting block before sliding over onto the sidesaddle. I knew immediately Oliver was very hyper. We headed back to the practice arena. The class prior to ours was already in the show ring giving us precious few minutes to get ready.

I can always tell when Oliver is tense. His trot is like a jack hammer, very tight movements and jarring to my back. With this comes a lot of animation, but it is very difficult and exhausting to ride for any length of time. As always, we were the last into the show ring. He was pulling down on the bit some and when I tried to lift him, it was not long before I decided the fight was feudal.

The arena is huge. Even though we were the last to enter the ring, we circled at the grueling trot 1 1/2 rounds before the judge called for the extended trot. All I did while we were suppose to be 'normal' trotting was to hold him back. When they asked for the extended trot, I just kept on at the same pace we were already moving...FAST. If all this was not nerve wrecking enough, my saddle was slipping! My heart was pounding when the judge finally called for the walk. I pointed Oliver's head toward the corner of the arena and that is where we headed. Then he called for the halt. Oliver stood still for about 5 seconds. Nothing brings the wrong kind of attention to yourself when you have to repeat over and over in a loud voice Whoa... WHOA... WHOA!!

Even this far from the end of the class, I realized that it would be a miracle if we were to place with the way Oliver was acting..in what was to be a PLEASURE class. Looking down, I could see his chest shaking.

Before the judge called for the next gait, I found us very close to the side rail so I reached over, grabbed the rail with my right hand and yanked the saddle back into the correct position. A woman standing by had a look on her face as if she thought I was going hop out of the arena! I tried to walk off but Ollie was anticipating the next gait and kept trying to leap into the canter. I am sure to the spectator it looked like he was trying to rear up.. but I know what he wanted.. He just wanted to GO.. and to get there FAST. Not sure where he thought we were going to go though???

When the canter was called for, we picked up the wrong lead. I found this odd since he is quite easy to canter on both leads and I had him set up for the right lead. We regrouped and he took off. Going a bit faster than I preferred but it was an acceptable pace. Back to the walk.. or at least we tried.

Making a large circle toward the inside of the arena and the class changed direction. Instead of trotting, now Oliver decided he wanted to rack. After yet another regroup, we picked up the trot. Oliver was hammering my backside. I tried to post as best as I could to temper the motion. With everything I was dealing with, I had not paid much attention to the other horses and riders until that is, when we rounded the corner and saw a big black gelding standing straight up on his back legs! Steering clear of that excitement, diverted my attention long enough to get through the excruciating extended trot. The last canter was about the only thing we did successfully.. but then there was the line up. Oliver was amused by the ring master, but after he asked us to back and then return to the line up, Oliver's attention span had expired. He refused to stand still. We just walked circles while all of the other horse and rider combinations accepted their ribbons.

I was felling very disappointed and right then and there, the highlight of the show happened. The young girl who was standing in the line up with her well behaved horse, a team who earned 3rd place, turned to me and said, "You inspire me."

Wow, I thought .. just WOW! That is what this is all about.. ribbon or no ribbon.

As we exited the show ring, my trainer Sandy smiled at me and said.. well you might not have won a ribbon.. but you definitely were not in last place! She regaled me with the antics of the other horses to make me feel better. I guess that is what you get when a shaved, fresh horse meets a cold windy day!

Oh yes - what was it that happened in the practice arena when Sandy was riding Oliver? When she asked him to flat walk after a short trot and he did not want to, he bucked her so hard that her baseball cap flew off of her head...and YES, she was riding him in the sidesaddle! She said they alternately cantered and flat walked for as long as they could before they had to come back to get me on him.

Well - that certainly explains the sweat on his neck.. but does it explain all the energy he still had in the show ring... and the ripe old age of 16?

Definitely sounds like an adventure but you rode through it well! That's an accomplishment in itself. Sounds like Oliver was wound up like a top!
I think some horses don't necessarily "settle" as they age, my mare will be 18 this spring and she can be downright nutty & hot still!