Angelina sent me this great e-mail about her sidesaddles. This is what she wrote:

"My newest saddle that I love is the Fraizer, I can't believe the only picture I have is on my very woolly horse last January," 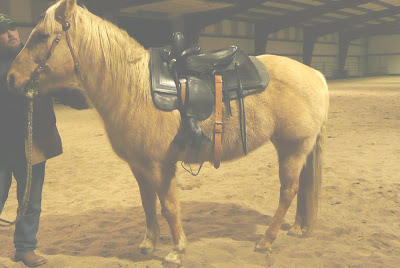 This is a picture she later sent me of her Fraizer: 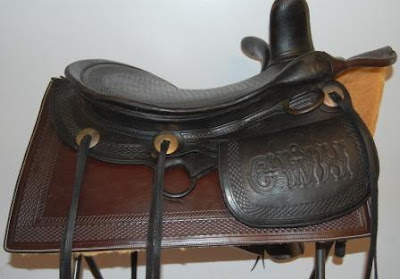 Angelina continued:
"There are more pictures on the side saddlery website. I bought it from the side saddlery who are great to work with because they also do repairs and are very professional so I knew I could trust it would show up in great shape. It is from about the turn of the century by the makers stamp probably after 1898 but it is very close to the Gallup saddle who Farzier was employed by from 1884 to 1892 when he became a partner, in 1898 he left to open his own saddlery. Frazier "Builder of the Famous Pueblo Saddle" is still popular with cowboy and saddle collectors the off side has a huge purse with some one's initials on it so it looks like a custom which was really popular with cowboys of the day so in my story in my head it belonged to a cattle bareness and she rode sidesaddle on cattle drives as the Goodnight saddle was developed for, but I'll probably never know the real story of who owned the saddle. 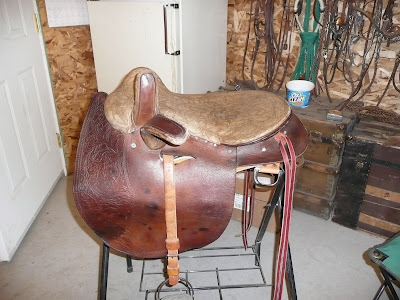 Personally I like the Goodnight saddles a lot better they are way more comfortable and in my opinion a lot prettier. It showed up with a cracked tree. Luckily one of my friends is starting to make custom saddles in Wyoming so I sent it to him, he fiber glassed the tree and put an entirely new western rigging and saddle strings on it. I had tried to sell it but then my 4-H kids wanted to learn to ride side saddle so I decided to keep it because it is a very solid little saddle now it fits the kids well and is very balanced so I don't worry about them learning to lean or it slipping.

I still want an English side saddle but I blew my extra horse cash on the Frazier so maybe next year. I love your blog and I have learned so much from it especially about the English classes, the etiquette, and traditions. We have one horse show here with a side saddle class that is put on by the Frontier Belles a side saddle drill team my Mom and I ride with but everyone rides western. I asked them if next year I could ride an English side saddle in the regular classes against astride riders. You have inspired me by the way so if I get an English one I am so going to do this. With western you can ride in modern clothes with an apron or try to have a period costume which was fairly random. Some women rode in English habits, some rode dressed similar their husbands rank if they were in the army and I would imagine those that rode Goodnights on the cattle trail were much less interested in being stylish, because I know when I'm out working cows I do not look stylish at all, but I have found very little information about that. For me showing English would be fun to have a habit and be able to look so much more put together, like you're actually at a show."

Thank you so much Angelina for sharing this information with everyone. You might be shocked at how many of the readers ride and show Western sidesaddle!!
Posted by Julie at 10:06 AM

Email ThisBlogThis!Share to TwitterShare to FacebookShare to Pinterest
Labels: Saddles

DO NOT GOOGLE IMAGES FOR "SIDESADDLE COWGIRL."

Oh now STOP that! You know that everyone (including me - hanging head in shame) is going to go right to that google search immediately!

I love reading about the Western sidesaddles, they look fabulous and so comfortable!
There aren't any in New Zealand,so I'd love to acquire one, one day :)

Seriously, it amazes me that the AQHA won't let women show sidesaddle. Talk about the best of Western Heritage!! I mean, they let little girls wear trampy outfits & makeup, and don't make kids wear helmets, so what's the rationale in banning sidesaddle?

Though I can't really picture a modern western pleasure horse able to pull it off.

Anyway, that's a neat old saddle. Your blog is so cool.

This spring our group of gals was asked if we would perhaps do a demo at the Quarter Horse Nationals in August as they were trying to petition to have sidesaddle allowed in their shows. We were thrilled!
In July I emailed the committee and wasn't even granted the courtesy of a response. Not one thing. Guess they decided they just weren't interested after all.

The Arabian horse shows have classes for both English and Western sidesaddle. I can never decide which class I like to watch best. They're both amazing!