Early Saturday morning, they started firing off the cannon .. every hour on the half hour! I tacked Oliver up at the barn which was about a small city block away from our booth. During that time, the cannon was shot for the first time. It gave me a chance to watch his reaction to the thundering boom. Well, he did jump a bit and he raised his head to a celestial level and kept it there for most of the day!

I chose to ride him out of the stable. Patti walked beside us until I got a feel of how Oliver was reacting and taking in all of the new sights and sounds! He was nervous.. understandably..but still such a champ. After all, at this time, he was all by himself as Patti was unable to bring her horse and the third lady who was planning on joining us had to cancel due to her Mother's surgery.

We walked over to our booth to make sure all of our displays were still safe and secure. I then decided to take Oliver into the center of the field for a nice canter. The cannon was not scheduled to go off for about 40 minutes and he was starting to settle.. but still I felt that he could use a bit of exercise to get rid of his energy. Such a gentleman, he gave me a soft canter and it was then I started to relax as well. Most of the crowd was seated on one side of the field where the booths were set up and where they were serving an all you can eat pancake breakfast. I noticed a lot of people pointing at us, so I decided to take Oliver closer. We trotted back to the side.. a very slow but very animated trot! Oliver was a star. So many people were taking his picture. We alternated trotting and walking along the sideline and Patti and I pointed out our booth telling the crowd to come over and visit us too. We answered 2 questions over and over.. 1. How do you stay on that saddle?.. and 2. What kind of horse is that? I was thrilled to answer both!

..and then it happened. I heard a man scream "Fire in the hole!" I barely had time to take a better grip on the reins when the first black powder gun went off. Oliver jumped about 2 feet straight up in the air and ran 3 steps forward. He then stopped telescoped his head.. and gave a grand snort. That was pretty much the protocol of the rest of the day whenever the guns were fired. When I was on Oliver and the cannon was to be fired, I made sure we were at the far end of the field. His reaction was the same.

Then we saw these 2 gentlemen. 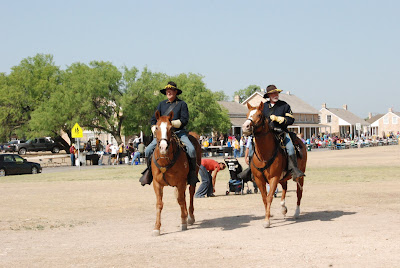 They saw that I was still a bit nervous and offered to ride on either side of us. They also told me that if I let Oliver just look at the cannon as it fired, he would not be a scared of it...and that is how they desensitized their horses to the noise. I looked down and noticed that despite all of the action going on around us, both of their horses were so relaxed, they looked like they were going to sleep! 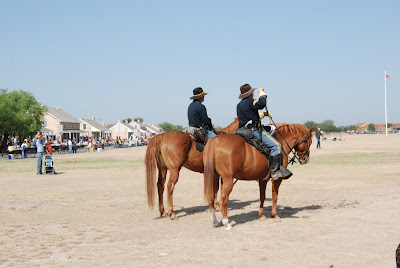 Okay - I thought.. but for the first firing, I wanted to be on the ground as he watched... since dismounting from a sidesaddle in a skirt was not as easy as off a Western saddle in pants! They agreed. 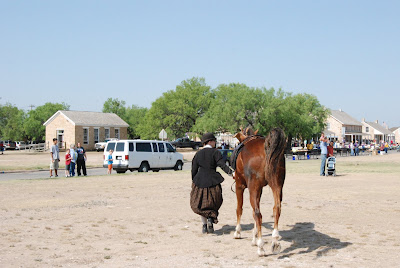 I got off and walked Oliver over to the side, where he could easily watch the whole event. 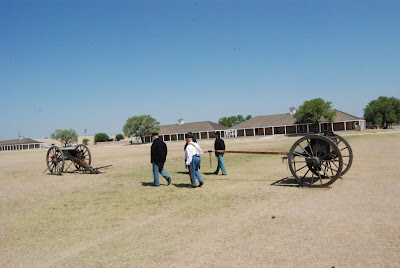 There was almost a ceremony about the way they fired the big gun. 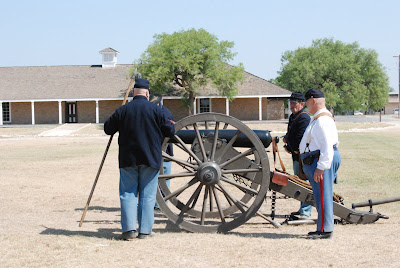 The soldiers would line up in their positions on each side and call out commands. 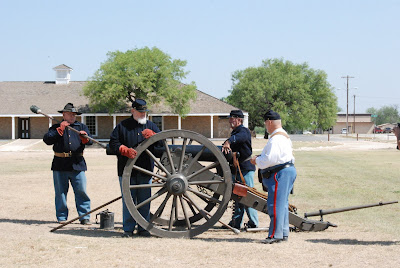 ...they loaded the cannon with what I found out later were blanks that packed the same amount of noise and vibration...only lacking the cannon ball... 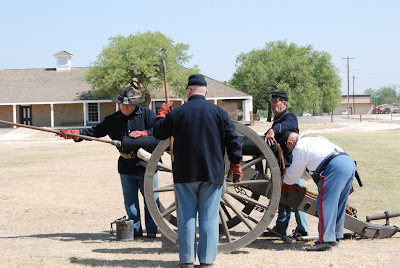 ..and then they got into position (fingers in ears!) and shot! BOOM! 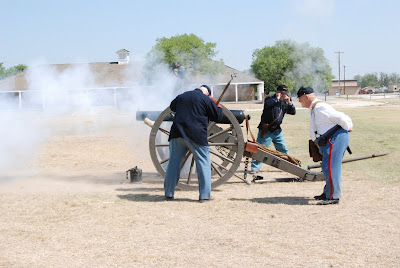 ..and how did he do? Oliver just stood there.. head up in the clouds as it had been since we left the stable.. but he did not jump and he did not run. 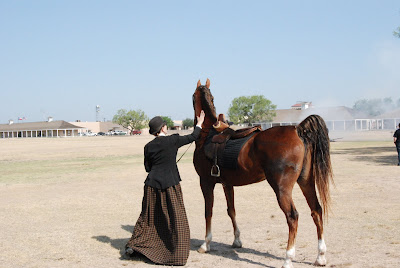 I've loved reading about this adventure! Please go on more so my horse and I can live vicariously through you and Oliver!

Three cheers for you and Oliver! I think you where both very brave. thakfully not many horses in our century will have to experience cannon fire.

Wonderful!! Oliver sounds like a real level headed guy. It's fun to see your pictures.

I have to ask...did you stuff his ears with you-know-what?

That last picture could have been from a painting...minus the tiny cars in the background.

Opps - almost forgot.. no earplugs of any kind were used.