I left Friday afternoon for San Angelo at 12:15pm. According to map quest it was to take 5 1/2 hours... Does anyone besides me know that Map quest LIES?? Well my first delay came because the quick stop I needed to make at the vets office to pick up Oliver's Neg. Coggins test. Umm - it was missing. Long story short.. it cost me almost an hour!

Back onto the road. It was extremely windy, especially the further West we went. A time or two, my heart jumped into my throat as the wind pushed the trailer so hard, it felt supernatural in force! Another hour delay in Kileen Tx. Horrible traffic! Next I found myself on a very lonesome road. It dawned on me it had been a very long time since I had seen a gas station. Thankfully I did not need gas... but it had also been a very long time since I had even seen another car! There was no shoulder on this country road and the occasional residence I did see were homes that I felt sure the occupants would not say .."Come and join us for dinner"...but rather, "Come and BE dinner!" ha ha..

So 7 1/2 hours later, I was so relieved to roll into Fort Concho. I was allowed to stable Oliver in a beautiful stall located directly across the isle from where Patti and I would be sleeping, in the climate controlled media room. It had bathrooms with showers! What a shame I did not think to bring a bath towel! 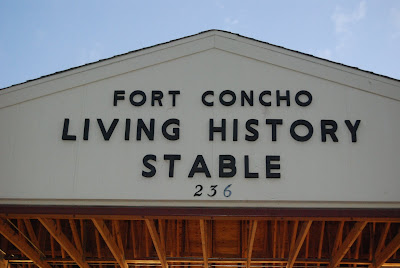 We were allowed to stable and stay there for free. That was good since it cost about $275.00 in diesel fuel for me to get there. We both brought snacks and drinks..so we were all set! The fort provided Army cots for us to sleep on and I wish now that I had snapped a picture of them. I threw my pillow and blanket down on one and slept like a baby. The fact that I was exhausted and had a glass of wine may have helped .. but I awoke that morning feeling very rested ...and excited.

Stored in the barn isles were antique stage coach that I will show you later and this chuck wagon! 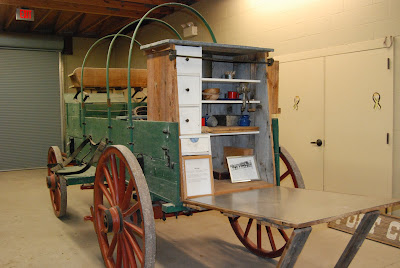 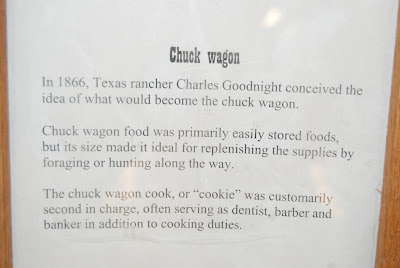 The Fort grounds were set up with the beautiful stone buildings set around a large field where the soldiers surely did their drills and marches. All the structures had to be rebuilt as they were in ruins. 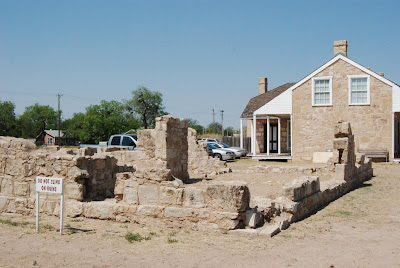 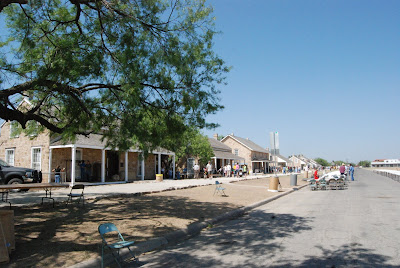