Although an "official" nursing service was not established until 1881, the corps traces its heritage to Florence Nightingale, who was instrumental in lobbying for the support of female military nurses.  The Army Nursing Service, which had been established in 1881, and which from 1889 provided Sisters for all Army hospitals with at least 100 beds, had only a small number of nurses in its employ. In 1897, in an effort to have nurses available if needed for war, the service was supplemented by Princess Christian's Army Nursing Service Reserve (PCANSR). Nurses registered for the service and by the beginning of the First Boer War the reserve had around 100 members, but swelled its membership to over 1400 during the conflict. PCANSR eventually became the Queen Alexandra’s Imperial Military Nursing Service.   Some of these nurses rode aside in the field to reach their patients faster.  In March 1902, Queen Alexandra’s Imperial Military Nursing Service (QAIMNS) was established by Royal Warrant, and was named after Queen Alexandra, who became its President. In 1949, the QAIMNS became a corps in the British Army and was renamed as the Queen Alexandra's Royal Army Nursing Corps. Since 1950 the organisation has trained nurses, and in 1992 men were allowed to join.
The associated Queen Alexandra's Royal Army Nursing Corps Association is a registered charity. Queen Alexandra was President from 1902 until her death in 1925. The following year she was succeeded by Queen Mary. 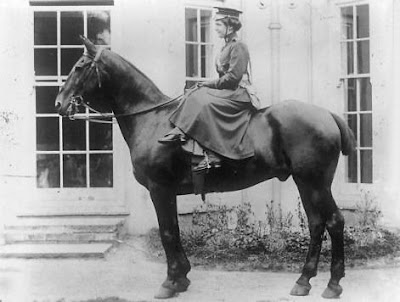 Sounds like a great show, especially for the first one of the year (which I always think is the hardest)!

Saddle fitting is a thing of great concern for all horseback riders throughout the world. Our ride entirely depends upon the fitting if the saddle. Vision Saddlery provide professional saddle fittings. These fitting are very comfortable for the jockey who is riding a horse.