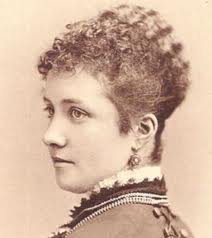 Katherine Caroline, aka “Kitty,” Wilkins was born in Nevada and moved to Bruneau County, Idaho with her family is the 1880′s. She joined the family’s cattle and horse ranching business at the age of twenty-one in 1879. Her father began taking Kitty to horse shows and she found that she had a knack for the business and decided to begin her own horse ranching business. She is said to have chosen horses because they were more profitable and less difficult to work with. She began her business with just one horse, which she stated she bought with $40 she received as a gift, and a contract with the U.S. Army. Her business boomed and was soon selling almost 600 horses per year. Some years were even more exceptional, such as 1895 when Kitty sold over 3,000 horses.

As Kitty’s success grew, so too did her contracts and her reputation. She was contracted to provide six railroad carloads (of which each car held 26 horses) of “broke,” or semi-tame, horses for sale every two weeks. When Kitty was able to consistently deliver on the contract, her reputation as the “Horse Queen of Idaho” was spread by newspaper from coast to coast. Idaho historian Arthur Hart said that Kitty was probably the most well-known Idaho woman of her time. Kitty herself was no stranger to creating publicity and often told vivid stories of her days as a horse trader. She even dubbed herself the “Queen of Diamonds” after her company’s Diamond brand.
Kitty Wilkins took an enormous risk in the livelihood and life she chose. Not only was she a woman in a field dominated by men, she was incredibly successful at it. Some of her ranch hands have estimated she made over $2,000,000 during her career. What made Kitty so successful was not just her tenacious spirit, but also her incredible mind for business. When others wasted time looking for auctions or shows to sell their horses, Kitty auctioned them right out of the railroad car. Kitty Wilkins succeeded because she had the skills and heart necessary to become Idaho’s “Horse Queen.”
Posted by Julie at 3:47 PM

This is off topic a bit, but I came across this today:

and I thought of you :) Isn't she beautiful?!