I went to Baton Rouge today to see Sport...so since I am going to tell you all about him - I thought I would also share the finished portrait photo.  I cannot tell you how well Jeanne has captured Sport in this work of art.  See that look on his face?  He gives me 'that look' all the time! 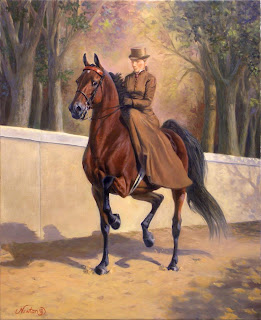 I was a bit concerned about what I would see today.  It was the first time I was going to visit Sport since I moved him to Maranatha Farm.  I had spoken to his new trainer only on the phone at length once, about 1 week after his arrival.  The news then was worse than I had hoped.  I had hoped that Sport's vacation would have revived his enthusiasm and that he would again become the happy horse he once was.  That was not the case.  The first 3 days Tommy worked with Sport, he was at the pivotal point of either going down hill very quickly, or starting to turn back to the positive.  He was throwing his head, jumping off the rail, spooking at everything and anything and even trying to go up on Tommy.  He was so volitle that Tommy would not let anyone else attempt to ride him.

After that first conversation, I felt like I had been punched in the stomach.  I was so sad.  I knew we had to back up Sport's training, but it was then that I learned just how far back we needed to go.  Also per Tommy's request, I placed a standing order with Smart Pak to put Sport on a quieting compound to help him deal with the stress.  I told him to do whatever needed to be done.  This horse owns a part of my heart and I wanted what was best for him, even if that meant I would not get to show him this year at all.

We ended the phone conversation at that.  Now you know why I was nervous - this just being 3 weeks later.

When I got to the farm, I entered Sport's stall.  I whispered softly to him and scratched his neck.  I missed him so.  When Tommy arrived, he entered Sport's stall, said loudly, "Hey Buddy" as he slapped him on the back a few times.  Sports head went up, his ears were up and in every other way - he looked like he was smiling and very happy to see Tommy.  My heart jumped!

Tommy tacked him up and led him into the round pen.  He placed the reins over the back of the saddle and told me that he only does this on Monday's because Sunday is the day of rest for the horses.  Sport trotted around on the rail with perfect manners, first one direction and then the other.  Tommy walked him out and led him over to the mounting area.  He got on him and started to walk him around the arena.  The whole time  he was working him, he was telling me of what he discovered about Sport - what works and what does not, what was doing with Sport now and what his plans were for the future.  I so appreciated this.  Best of all, from the second he started to trot, Sports head was in a magnificent place, high with his chin dropped - and the best of the best.... Tommy only had a light hold on the reins!

It was so amazing I was jumping up and down (like a fool!) and I screamed "I love you Tommy!"  To me - he had already accomplished a miracle!!!  He continued to work Sport by trotting and cantering him in both directions.  I had to think back.  At the last horse show, it was decided not to show Sport in a canter class, because he was just too unpredictable and way too strong - especially for me.  I had to have a death grip on the curb rein on a training bridle to keep his head in a moderate position...no where near as nice as where he was carrying his head today.  I felt such a sigh of relief.... my boy was coming back.  He was bright.  He was happy and if all of that was not amazing enough, I rode him too ... all 3 gaits...and it was FABULOUS!!

So for now, my 5 gaited horse is just working on being content and happy doing 3 gaits.  He is still working in a training bridle, but will soon start again in a full bridle, and I am shelving the thought of riding him aside... at least for a while...but the key phrase here is that I now again have a "happy horse"!!!

Email ThisBlogThis!Share to TwitterShare to FacebookShare to Pinterest
Labels: Art, Horses, My Own Adventures

sport lives 25 minutes away from me!!!