There was a huge sound of a collision then, like a toppling mountain, and then a vast ringing as if a thousand blacksmiths were beating on their anvils. We looked again and—dear God alive!—the Elector’s men were all down and trampled like a wheat field scoured by a hurricane, and they… the husaria… were already far beyond them, with lance pennons flickering… Henryk Sienkiewicz, The Deluge

The last thing that thousands of Swedes, Cossacks, and Turks ever saw: 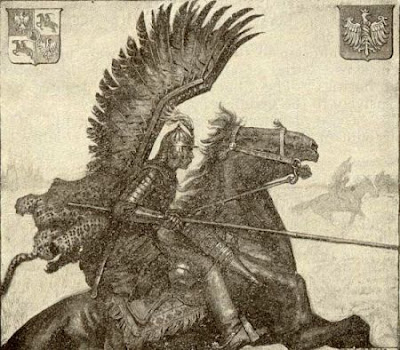 The invincible Russian field marshal Aleksandr V. Suvorov (one of our favorite role models) developed the “attack through” in the 18th century. In contrast to what one usually sees in movies, in which cavalry rides up to the enemy to exchange sword cuts, the Russian cavalry would attempt to ride through the enemy at a full gallop. The effect of this kind of shock on unprepared troops, and very few troops were trained or prepared to deal with it, is easy to imagine. The impact is so terrific that, until the development of sophisticated computer animation (e.g. Lord of the Rings), the attack through could not even be portrayed in movies. When Suvorov conducted training exercises, men were occasionally killed by collisions despite the safety procedures (each man to take a step to his right, or have his horse take a step to the right, at the moment of contact) in drills. It is therefore easy to imagine movie extras killing each other, and their horses, in the same manner even with safe stage weapons. 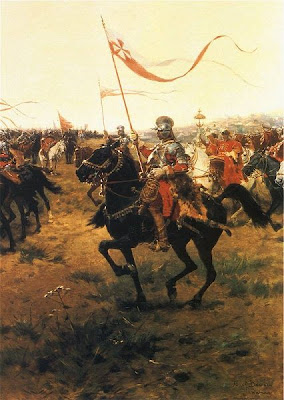 The Poles were, however, using the attack through almost two centuries before Suvorov. Cavalry of the pike and shot era of warfare tended to attack in what was known as the caracolle: ride up to the enemy, discharge pistols, and wheel away to reload. This was a losing proposition against musket-armed infantrymen and pikemen to hold the cavalry off while the musketeers reloaded. The innovative Poles developed a very simple solution: ride straight through the musket and pike formations. They employed a very long lance, which was hollow to keep its weight manageable, to hit the pikeman before he could hit the rider or his horse. Furthermore, the impact often threw the pikeman into the ranks behind him, thus adding to the chaos at the receiving end. At Kircholm (1605), Swedish pike and musket formations were simply wiped off the face of the earth. 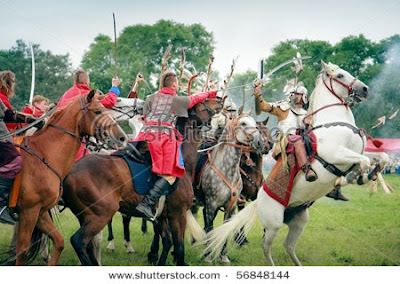 The Husaria, or winged hussars, were more heavily armored than the familiar Hungarian hussar. The Husaria wore leopard furs over their armor to terrify opposing horses that were not used to them, noting that a horse’s sense of smell is comparable to a dog’s. The wings, which emitted a rattling or hissing noise during the charge, had the same effect. In addition, they prevented lariat-armed Tartars from lassoing the Husaria.. 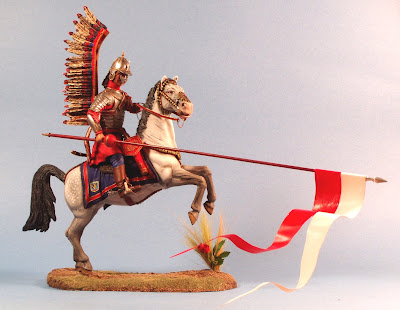 The only sure defense against Winged Hussars consisted of the tabor, or Cossack wagon fortress. (It worked a lot like pioneers who “circled the wagons” to defend themselves against attackers, and an example appears in the movie With Fire and Sword.) Even the tabor was vulnerable to the highly mobile horse artillery or “flying artillery” that Poland developed during the 17th century. At Vienna (1683), most of the allied armies had cannons, but only the Polish artillery was sufficiently mobile to come into action against the Turks. Lesson: a three-pounder at the front, and in a position to fire at the enemy, is worth any number of twelve-pounders at the rear.

Why in the world am I doing a post about Hussar warriors on my sidesaddle blog? Well, it is because of these soldiers, that the invention of the Hussar saddle pad was created. To me, it is a thing of extreme beauty.. 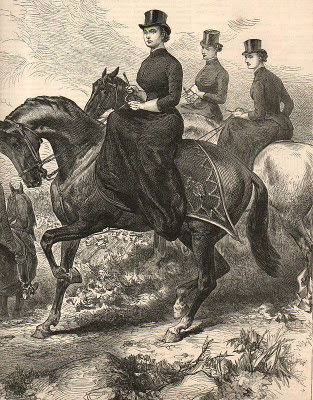 ..but to a warrior, it was a protective pad so that their swords did not cut their trusty steeds!

Here is the first one that I ever saw. Riding full on is Karen Trevor... the lady who makes the amazing corsets I ride in! 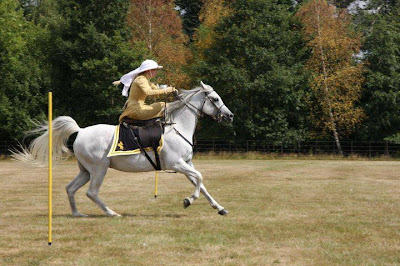 I have followed your blog with great pleasure for sometime. I just wanted to say thank you for spreading the sidesaddle glory. I was doing some scrapbooking and found some vintage freebies and noticed that that these two in particular had sidesaddle pictures!