I took my camera with me to my riding lesson today.

This is Bella Equus. She is only 3 1/2 months old and is here for preschool training. She will be shown in hand at the Texas Futurity show in Dallas next month. 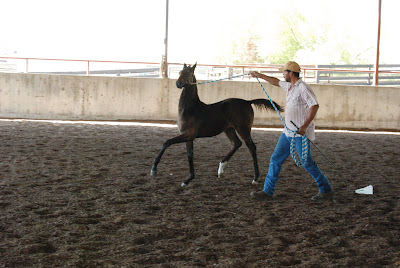 She is learning how to trot beside a groom and how to stand and pose. I am not sure she has figured it all out yet though! 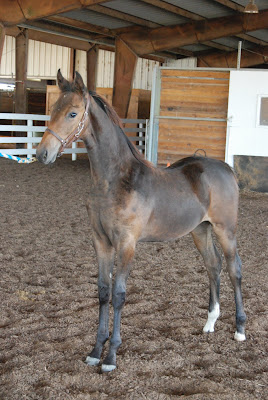 After the show, she will be turned out into the back pasture to grow up until we are ready to start her formal training.

Sandy is the head trainer at Bluebonnet. Here she is riding Equusport (Sport) for me. He has been in training for about 6 months and Sandy just took over. Let me explain that. A young man works with the young stock named Gornio. He works with them in the bull pen teaching them how to lunge and then to long line and eventually he trains them to jog in a cart. Next another young man comes into the picture and is the first one on the geldings back...again starting out in the bull pen and then working in the big arena. Only when the basics are covered and the horse is working well, does Sandy take over. Sandy has a true talent for getting each horse to work and show at their ultimate capacity. She puts the final touches on the horses and really finishes them out. 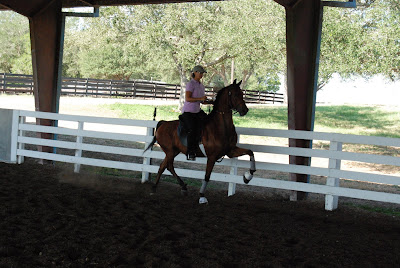 Don't get me wrong. Sport still has a long way to go. He is not cantering under saddle yet, nor is he wearing a full bridle.. but Sandy will get him there. He is slated to be shown at the Christmas TASHA show in December with Sandy astride. 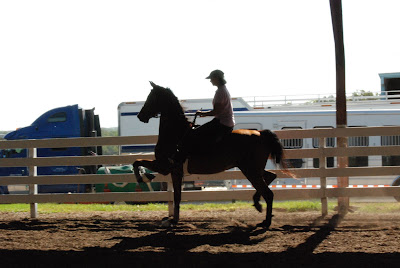 The biggest thrill though was to find out that Sport was ready for me to come aboard!!! 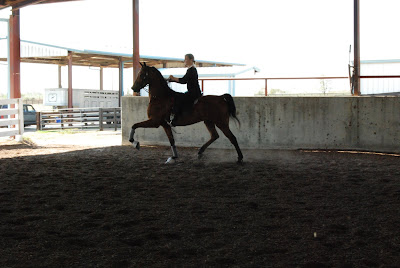 I was very timid at first, but Sandy assured me that I could take ahold of him and even tap him on the shoulder if I wanted to step him up a bit. I was thrilled!!! Sport is one of those horses that came out of the womb spectacular...and he just keeps on impressing me. 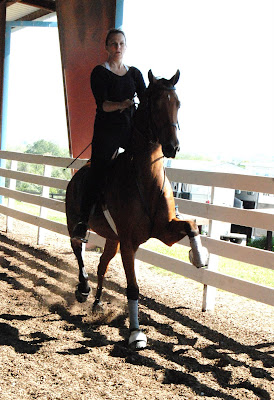 Before our ride was over, I just had to lean down and whisper a few sweet words to him..sigh.. 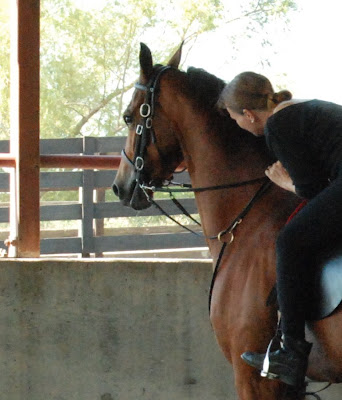 I did ride Oliver sidesaddle today and it was a great ride..but no one picked up my camera during that time. Shar, one of my girlfriends came with me this morning and she did take some pictures with her camera, but I have not yet seen them.

Email ThisBlogThis!Share to TwitterShare to FacebookShare to Pinterest
Labels: My Own Adventures

Gorgeous!
I've been following your blog for several months but just had to stop lurking today and tell you how truly lovely your two young horses are. I've grown up riding in the h/j and dressage worlds but have always been a (sometimes secret!) Saddlebred fan. Your boy Sport is just gorgeous and I can't wait to hear how he does at his December show. It's been educational to hear about the training process, too.
And your filly is so delicate and pretty! There's a model horse sculptor named Kathi Bogucki who did a piece called Strawberry Jam, that looks just like your Bella in her standing photo :)

Oooh Sport is a cutie!

Coming from Down Under, I don't know much about Saddlebreds. How do you train them to pick their feet up so high? We hear horror stories about shoeing 'aids' used in America so how does your farrier do your horse's feet?

That filly knows she looks good!!

The 'stories' you hear are about soring Tennessee Walking Horses I believe. TWH do not trot, they do a lateral gait called run-walk instead of a trot. You can not sore a trotting horse because as you probably already know with your own horse.. when they trot - the whole world can see if they are sore..(limping, dropping the shoulder, bobbing head, etc.) Sadly that does not happen in a lateral gait..which is why the bad trainers of TWH's have gotten away with it for so long. I would never tolorate any abuse with my horses.. ever - end of story!!

If a Saddlebred is not born knowing how to trot high, there is little you can do to make them do it. We breed them to have a neck that shoots straight up out of their shoulders.. which throws the shoulders back and then frees up the legs to 'trot high'. You can improve the talent they have by strengthing the chest and shoulder muscles.. but you cannot make a champion out of an untalented horse.. trust me - I have several pasture and trail horses that I bred that just did not make it as show horses. Still have a job and are good horses.. but not talented enough to invest in more training and taking them all over the US to show.

Oh how interesting. I had a closer look at your pics, and yes their necks do shoot up like a giraffes!!! And I see you sit back with high hands when they are doing that high trot.

I was interested in the shoes too - I know dressage folk often put heavy shoes on their horses to encourage exaggerated movement, and in your title pic Oliver seems to have cream-coloured solid shoes on. Are these normal saddlebred shoes or just common american shoes?

What a gorgeous boy you have there...