You can often find copies of the book on e-bay, but you can also read it for free as it is published on the internet in its entirety!
http://www.sidesaddle.com/reference_pages/The%20Horsewoman,%20by%20Alice%20M_%20Hayes.htm 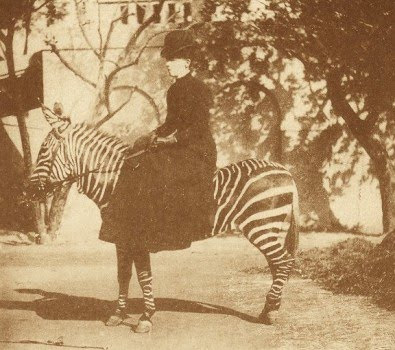 Oh yes - about the zebra picture.. this is what she wrote in her book about it:

The most awkward kicker I ever rode was a mountain Zebra, which my husband broke in at Calcutta. He kicked very neatly without lowering his head, and, as the slightest touch on his ears drove him nearly out of his mind, I had great difficulty in avoiding them, as he kicked with a sort of peculiar wriggle which complicated the performance for me, because I had had no practice on a kicking zebra, and had to pick up my knowledge as I went on. It was no use trying to rein him back; for he had a neck like a bull, with a small rudimentary dewlap, and at every kick he gave, he made a noise like a pig grunting. His skin was the best part about him, and was as lovely and soft to the touch as the finest sealskin. As I believe I am the only woman who has ridden a mountain zebra, this photograph is probably unique. It ought to be a better one, seeing the trouble I took to make my obstinate mount stand still; but he seemed to regard the camera as an infernal machine destined for his destruction, and flatly refused to pose nicely for his portrait. He was far too neck-strong to make a pleasant mount for a lady. Kickers, as I have already said, should never be taken into any hunting field.
Posted by Julie at 12:08 PM

LOL..loves how she ties it into the hunt.. Wouldn't that be funny..a zebra on a hunt :)
I am LOVING these snippets of history :) Thanks!