....and a bit of information found on Lady Anne Blunt on their facebook page! 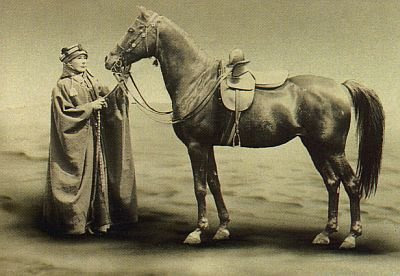 Lady Anne Blunt 1837-1917 Granddaughter of the poet Lord Byron, Lady Anne Blunt was the first European woman to explore Central Arabia, and is considered the saviour of the pure-blood Arabian horse.
Lady Anne Blunt lived most of her life in the shadow of her awful husband Wilfrid, an adulterous cad who pranced about spending her money willy-nilly. He even moved mistresses into Crabbet house; Lady Anne seemed to put up with all this and was more or less content to stay out of theLady Anne, unable to tolerate what she termed an "oriental" lifestyle, left him. The Blunts agreed to a formal separation and the Stud was divided. Lady Anne signed a Deed of Partition drawn up by Wilfrid. Under its terms, Lady Anne kept Crabbet Park and half the horses, while Blunt took Caxtons Farm, also known as Newbuildings, and the rest of the stock.

Following the separation, Lady Anne spent several months each year at her Sheykh Obeyd estate near Cairo, a 32 acre (129,000 m²) apricot orchard the Blunts had purchased in 1882 and set up as a breeding farm for the horses they owned in Egypt. Her daughter Judith lived full-time at the Crabbet estate with her own husband and children. Finally, leaving the stud under the management of Judith, Lady Anne left England permanently in October 1915 and spent the remaining years of her life at Sheykh Obeyd.

Legacy limelight while her own achievements - 2at least in the eyes of modern-day Arabian breeders - far outweighed those of her husband.
Add a caption
Lady Anne Blunt, in Bedouin attire, with her favourite riding mare, Kasida

In this photo: lady anne blunt, kasida
Posted by Julie at 9:51 AM

Need a bit of editing, but still cool!

Nice mare! She is really built for work.

I was able to trace my mare's pedigree back to the desert ("DB") via Crabbet Park Stud. My gelding is Egyptian Arabian with a few ancestors from the Blunt stud.

"A Pilgrimage to Nejd" chronicles the Blunt's horse-shopping trip to Arabia. Complete with bedouin attacks and harems. I think it would make a great jump-off point for a movie with a strong female lead.