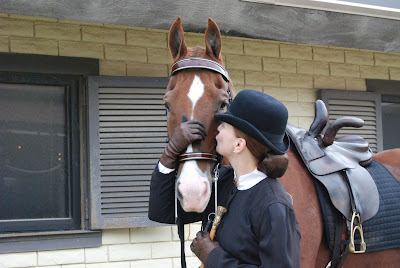 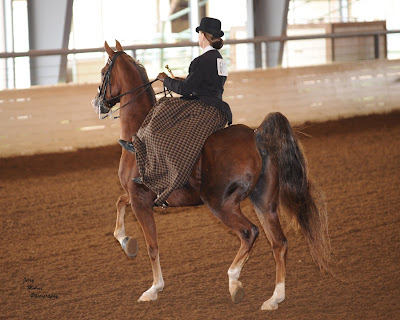 Sunday mornings alarm came faster than I would have liked! Our class was the 6Th class of the morning - so we did not have much time to spare. We hurried through breakfast and got over to Las Colinas as soon as we could. Once there we found out that 2 of the classes before us were cancelled! Again it was quite cool and breezy.

I quickly changed clothes while Kelli tacked Oliver up...again putting on everything but my gloves and my skirt. I led him into the show ring. The show did not start for another hour and there was only 1 other person out there. We went to the far end and I started to lunge him. I worked mostly on going from any gait down to a FLAT walk...and repeated it over and over trying to establish a calm for both of us. He was responding well.

We took him back to the stalls and as I finished dressing, I breathed a prayer. The woman who's horse had reared up was not showing that day. She was very sore. A trainer from their barn would show the horse instead. I just wanted a more calm atmosphere for ALL the horses and riders.

I met Kelli behind the stalls since we decided to get me mounted back there today. There was more privacy and less traffic. I walked Oliver around the stalls and into the arena. On this day I was wearing the shorter black jacket and a brown and black plaid WOOL skirt.

We adjusted the girth a bit and I took him to the rail. After walking a few rounds, I clucked him into the trot. Ahhhh Yes! I thought. This was so much more comfortable...or at least a bit more secure feeling. I trotted around the ring and had to deal with a 'spooky' area for Oliver. It was god practice for me as I had to use left leg pressure to keep him from jumping into the center of the practice ring.

Again the class just proceeding mine was full of very young academy riders..so I waited until they were all in before I asked for the canter. Yeah! I felt so much more confident!

Our class was called and the gates were opened. Again, I waited for everyone else to enter before me. There were 6 of us in the class. This time we trotted into the arena..probably too slow, but I was being very cautious. As we reached the other side, Oliver stepped up a bit and gave me a beautiful level trot. I started to smile and knew I could go for quite a long time if I needed to. Before I knew it, the walk was called and I pulled him down. He gave me maybe 2 jigs before he truly flat walked. Then came the canter. I cued him and off we went. It was perfect. I could hear Kelli's approval and Oliver was cantering and flexed so beautifully. We then reversed and again began to trot...walk..and then again cantered. I did not see any of the other horses misbehaving..so my prayer had been answered. We trotted into the line up and I scratched Oliver's neck telling him what a good boy he was. He whinnied again and the crowd cheered for me. I love it when Oliver does that...but I wish I knew what he was saying!!

The first place winner from the previous day won the championship. I am not sure about the placings of the other horses, but our names were called for 5TH place. I perked my head up and listened. I thought there were 6 horses in my class, but maybe someone dropped out... I waited...and then I heard it... the announcer spoke and revealed that someone else had placed under us. 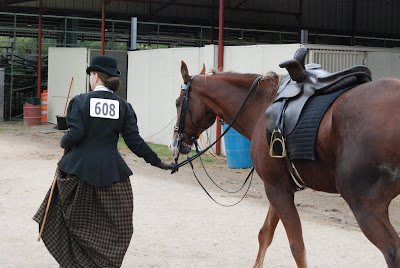 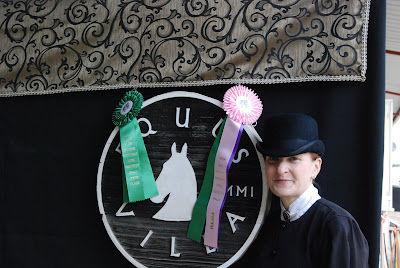 Wow Julie ..I am so proud for you .. and so happy everything went so well.. Oliver is a beauty..and you looked so elegant ..the skirt is beautiful ..sorry it was slippery.. but you did GREAT!!! CONGRATS!!!!
Love ya
Vicki

Julie you are so gutsy doing this and you two look so incredibly elegant and very put-together. Oliver when he whinnies is saying to the audience, "let's have some applause for MY MOM!"

Hint on posting: if you point your right toe down and slightly in toward Oliver's shoulder that will lengthen and tighten your right thigh (quadriceps) and also will improve your purchase on your top pommel without "death gripping" and will help balance you through the phases of your posting. What I suggest is having your trainer hold Oliver at the halt and then you close your eyes (to help focus on what you need to without visual distraction) and try the right toe pointing downward and in toward the shoulder and feel how that changes the way your right leg works on the saddle and pommels.

I'm quite sure that posting is easier for you on an American Saddlebred such as your wonderful gelding because there is enough hock action to help pop you into the rhythm. Just remember it is more rolling forward onto your right thigh than coming up out of the saddle as you would in cross-saddle posting.

Just a few hints from someone who has been riding sidesaddle for over thirty years!

Wow - I love it! Congratulations, I think you look so classy and lovely. Like you jumped right out of the pages of a Jane Austen book. Oliver is adorable too!

Julie off topic sort of because it's about another Saddlebred who is being shown sidesaddle in California. This is an inspiring story because this particular SB was a feedlot rescue (kill buyer horse) who was finally identified and because he has his ID again his forever owner now can show him in their new passion, the parade class (and they carry the flag, too!). His story is at www.tierrescue.org/nickers.htm with the latest blog entry being in September. Lots of sidesddle photos and a wonderful story.

Congrats!! This is so wonderful! did you have any more classes?

CONGRATS!ON A SHOW WELL DONE!! I LOVE YOUR HORSE HES SO BEAUTIFUL NOW ONWARD TO THE NEXT SHOW RIGHT! GREAT FUN!

wow! i am so impressed! great job to you and Oliver!
Karen