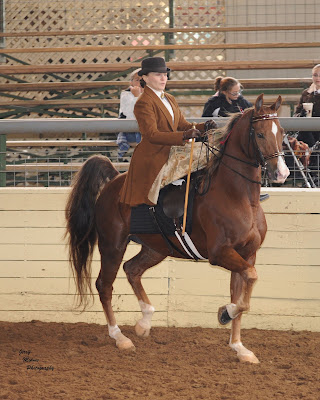 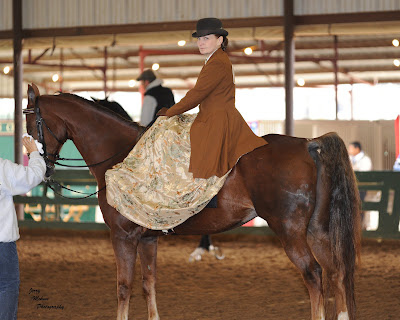 As you can see - the longer saddleseat coat is not as attractive as a shorter one would be.


We awoke at 6:30am and I threw on some jeans and a t shirt and grabbed my coat. I drove over to the show grounds to feed while Kelli got ready. My class was number 22 that morning, so we knew we had some time. It was cool and breezy, about 52 degrees but the air was very wet making it feel much colder.

I checked on all of our things and Oliver. He still had a bit of alfalfa left in his bag, so he was not as insistent as some of the other horses to be fed. When I was done, I took a moment to look at my show clothes and decide which outfit to wear. Our judge was a very respected equitation teacher named Gayle Lampe who is the author of one of my favorite saddleseat books entitled Riding for Success. I was so angry at myself for not bringing my book with me so she could sign it. With her in mind, I decided to wear the traditional longer saddleseat jacket with the embroidered silk skirt in that mornings qualifier.

I returned to the hotel and took my turn in the shower. I pulled my hair back into a low bun and smoothed on some make up. I felt good, like I looked elegant...even though my insides were all a flutter!

When we reached the show grounds again, we realized that there was little to no real space to lunge Oliver - at least no place that was not wet. We scrubbed his feet the night before, so we took him over to the wash stand and polished his hooves. Kelli stood with him as I went into the tack room and dressed. I put on everything I was going to wear in the show ring except my skirt and gloves. We then tacked him up and led him over to a soccer field to lunge. It was still wet, but not muddy over there. We could only trot him as we were afraid he might slip and fall at the canter. We attracted some attention from a portrait photographer who spotted us from across the street.

Back at the stalls, we adjusted the saddle, I finished dressing and we took Oliver into the practice arena where I mounted. I felt like every single person was watching us...and I think I was right. I could hardly breathe! We walked the rail and some of the people I knew well (and who knew I was doing this for the first time) came over to encourage me. I so appreciated that. Feeling good, I asked Oliver to step into the trop. Not 3 steps in and I realized I had a big problem. My silk skirt was about as slippery as butter! I pulled him into the center of the ring. Kelli, who had an inquisitive look on her face came over to me. I told her what I was feeling and she readjusted my skirt, raised the stirrup another notch and again tightened the girth. None of these things stopped the skirt from being slippery, but all together they gave me more stability.

We were in the practice arena several classes prior to mine. I needed lots of time to calm down and to relax. Sadly..in retrospect, it seems that I needed about 9 more hours! Oliver was very amped up as well. The class directly proceeding mine was an academy class full of very young children. I waited until they were all in the show ring before I cantered in the practice arena.

Finally my class was called. I knew that I wanted to be the last one in the ring. This first cool front had caused almost every horse in my class to act afool, some worse than others! We went into the ring RACKING. Oh Lord, I thought...calm down Julie. I had not realized that there was one more horse behind me...but it was not until we reached the other side of the arena that I slowed him down into a trot..a very slow trot. We worked our way into a bit more speed, but I knew the judge was not looking at us because of our position. No matter, I was just there to make a clean ride...or as clean as possible anyway! I was just starting to relax a bit when the walk was called. I tried to slow him down. Oliver was prancing and not flat walking. The horse in front of us was jumping sideways down the rail. Then the canter was called. I tipped his head a bit and kissed. Oliver lifted in one step and I felt my face crack into a smile. In the background, I could hear no music, although I know it was playing, I could not hear anything except the call of Kelli's voice saying YES!!! meaning we had picked up the correct canter lead. At this point I was not willing to lean or even look down to check it myself. I just wanted to look up and forward. We cantered around the horse that was blowing up in front of us and then again around another that would not pick up the correct lead and I felt as if I had grown wings!

Back down to the walk. We changed directions and the trot was called for. We started to trot down the rail and I could see Oliver's knees pumping up and down in front of himself. I knew he looked good! Around the bend and all of a sudden, I was slipping on the dag blasted skirt again. My butt was sliding on the saddle from right to left and I lost my balance a bit. In a desperate effort to recover, I grabbed Oliver's mouth. My sweet boy was trying to do everything I asked of him and obviously he thought I wanted him to rack...so again we went down the rail racking.. Oh well..'remember why you are here Julie' I kept reminding myself. It was not about the ribbon..it was about getting experience, getting as clean of a ride as I could get and making a good impression with riding aside. I slowed him into a pacey walk and asked for the trot. After 2 tries we were trotting again. All this again happened right in front of the judge. Another walk was called ..and again we were prancing (bad bad bad) and then the wonderful rewarding canter. We trotted into the line up and Oliver stood like a gentleman. He whinnied LOUDLY at the crowd and laughter broke out. I was blushing. When the judge came over to us and asked us to back, a lot of cheers and applause broke out. Oliver backed again like the gentleman he was!

I made it! I made it though the entire class without falling off or throwing up. We got our canter departs and leads and I knew what I needed to work on for tomorrows championship. I placed 6Th out of 6 riders...and that is what I deserved...but I'll bet I was more proud of my ribbon than the woman who placed first!

Once the judges card was turned in, the horse next to us started to back up. He reared straight up. Oliver and I just stared at them. It almost did not seem real. The woman riding was obviously in shock and the horse fell backwards and rolled completely over her. Oliver jumped to the left, just to get out of the way. You could hear the crowd gasp. I am not sure they saw what I did...but I was truly amazed that she got up. She was quite dazed, but not injured!

Oh WOW the picture looks GREAT!!! Oliver is such a cutie!

WOW Julie you made it! Congrats and esp. congrats to Oliver who though wanting to be, ah, quite "photogenic" kept his cool under pressure of extraordinary events.

You need to have the silk skirt be an apron so you do not sit on slippery fabric, and either wear sticky breeches or spoil your saddle with doeskin strips or Sadltite (hate that stuff but in an emergency it works well - if they even still make it). Find yourself an old pair of Harry Halls with the full seat and practice a bit, you won't believe how secure you feel.

You made it! Hooray!!! The hazzards of slippery skirts never even occurred to me.

PLEASE POST MORE PICTURES OF THIS EVENT!ON A HIGH WIND DAY OR A CHANGE OF TEMP. DAY A HORSE WILL ALWAYS ACT UP THATS A GIVEN!CONGRATS ON MAKING YOUR CLASS I WOULD BE PROUD OF THAT RIBBON ASLO! A GOOD FIRST TIME OUT!

What an elegant turnout. Too bad the silk was slippy but live and learn. Glad the girl next to you was okay, what an ending! You have the first show under your belt and can look forward to many more. Oliver is absolutely class all the way! Love the expressive face.

You have worked so hard I am so glad you got a ribbon after all!

You did a great job for your first try! And you learned something *important* -- never try something new, whether an apron or anything else, right before you enter the ring!

And a regular sidesaddle apron also would help, because you aren't actually sitting on it. :)

You and Oliver will do great!

I like use viagra, but this no good in my life, so viagra no good.