Don wants to name him Lucky... but he said not to name him anything for a few days...so I guess he has to earn the name 'Lucky'.. maybe I need to call him "Blessed" until then!.. you know - the call it as you want it theory!!

So he is doing better, but is still quite behind what I would call normal.  He eagerly brays at me and eats when he is hungry.  We always keep lamb milk replacer on hand.  He is going to the bathroom on a regular basis and he can stand up for several minutes by himself.  What he has not been able to do as of yet is walk or get to a standing position on his own.  I set up a large dog crate in our den, lined with a towel.. several more atop for multiple changes as needed.  Can you tell we have been through this before?

Here is a picture of the first lamb we raised on a bottle: Roman. 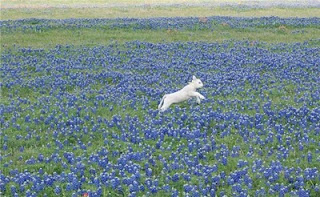 Roman lived upstairs with us and slept in a crate.  He was bathed in the bathtub and loved it...even once jumping into the tub with me.  He was leash trained and he followed us everywhere ...but he grew and Grew and GREW... and as hard as it was... we had to do it..

We had to put him outside with the other sheep...and he stood just like this for days .. crying for us to come and get him.  I hated that... 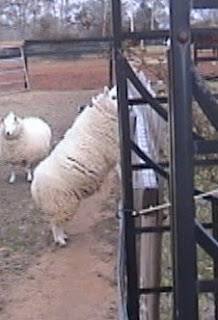 ..but he did get used to it and he is still the sweetest thing.  Although he is a miniature breed of sheep, he is fat and still tries to sit in my lap!
Posted by Julie at 8:01 PM

Email ThisBlogThis!Share to TwitterShare to FacebookShare to Pinterest
Labels: The Farm

When I was about 4 my mom bought me a bum lamb to raise. I named her Mary, you know "Mary had a little Lamb" She thought she was people and when we made her stay outside we had another sheep who she ran from frantically terrified because she had never seen another sheep before. Anyway good luck bottle babies are a lot of work but if he made it two days it's a good sign.