The following infomation about Elizabeth was found on Horse and Hound Art dot com.

Elizabeth trained in fine art at the Leicester College of Art and Technology in the 1960's, when modern art was all the rage. However, she was brought up in rural Lincolnshire (where she still lives) and her artistic interests have always been more with the country pursuits and animals around her. Although she paints all subjects, animals remain her favorite.

She has been a full member of the Society of Equestrian Artists for many years, and has served on its Executive Committee for several of these. She is also a full member of the Society of Women Artists, and exhibits regularly in London with both groups, as well as in other mixed exhibitions around the country. Elizabeth works mostly on commission for clients from all over the world; usually working in acrylics and oils, and occasionally pastels, she also produces sculptures, and has also worked on bone china and porcelain. 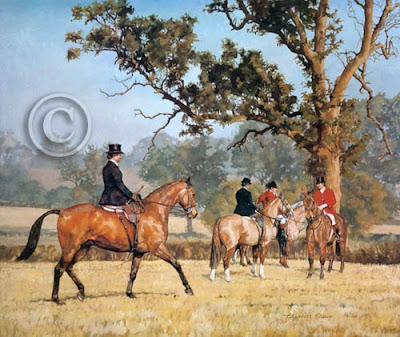 Having bred Morgan horses and hunted for many years, with the Belvoir Hunt, both these elements feature strongly in her portfolio, which includes many paintings based on racing, eventing, polo, showing, dressage and driving. Apart from horses she loves to paint all kind of animals, and dogs come a close second in her affections. Six dachshunds of her own have helped shaped these affections, but she has portrayed many other breeds over the years!

With commissions forming such an important part of her artwork, portraits inevitably form the largest part of her range, and over the years she has developed a particular ability to reveal that character of each of her subjects which makes each animal a true individual (and recognized by his or her owner as such!). 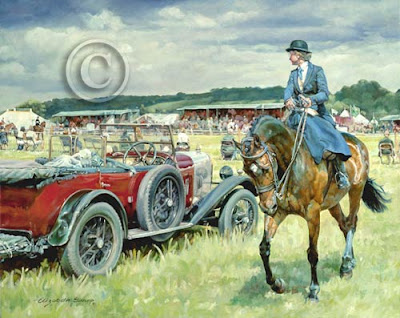 Elizabeth also produces sculptures - mostly portraits of historical people and places, and a number of these have featured in city centre developments from Nottingham to Sydney Australia! She regularly produces presentation paintings and sculptures, as well as bone china and porcelain items for private individuals, companies, sports bodies and societies.

***Sadly, I was unable to find a photo of the artist herself, nor any further information as to when she was born, if she is still living or still creating great works of art.
Posted by Julie at 9:53 AM

Email ThisBlogThis!Share to TwitterShare to FacebookShare to Pinterest
Labels: Artist in Review

Just beautiluf! thanks for sharing whith us the results of your passion and your searchs!

I really like her work. Thanks for sharing all of this.