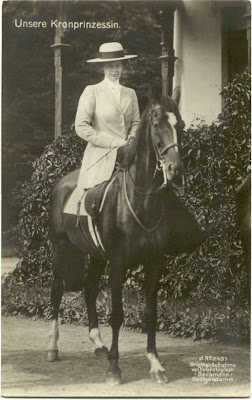 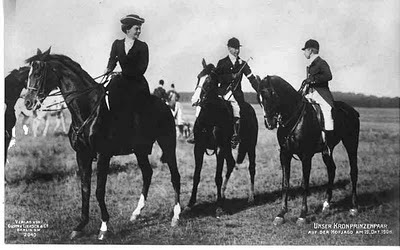 Basic Biography:
Cecilie of Mecklenburg-Schwerin; Cecilie Auguste Marie was born on September 20, 1886 at Schwerin, and died May 06, 1954 at Bad Kissingen, Germany. She was a Crown Princess of Germany and Prussia as the wife of German Crown Prince William, the son of German Emperor William II reigning from 1905 to 1918.

She was the daughter of Frederick Francis III, Grand Duke of Mecklenburg-Schwerin and Grand Duchess Anastasia Mikhailovna of Russia.

Duchess Cecilie married William on 6 June 1905 in Berlin. Once she was married she was styled Her Imperial and Royal Highness The German Crown Princess and was also Crown Princess of Prussia. Her husband died in 1951, making her Dowager Princess. Cecilie died on 6 May 1954 of a stroke and had been ill for some time leading up to this. She and her husband are buried in the grounds of Hohenzollern Castle.

Prince Louis Ferdinand of Prussia, Head of the House of Hohenzollern (1907–1994); married Kira Kirillovna of Russia.

Cecilie had a happy childhood. She was selected as a the bride for the Crown prince, and the wedding in 1905 was reported as a spectacular public event, with an artistically decorated procession through Brandenburger Tor in Berlin. 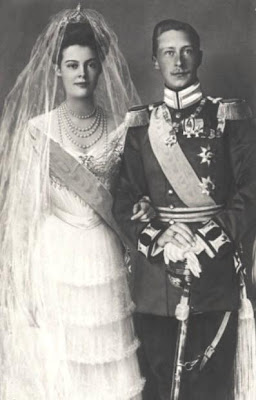 Cecilie quickly adapted to the role of Crown Princess and became popular both by the public and within the court. She is described as quiet but friendly, a natural beauty. She became a role model for German women within fashion, and was also interested in social issues, especially women's education. Several schools and roads were named after her. Cecilie and William drifted apart because of William's adultery, and after the abolition of the monarchy, they separated. When her spouse and parents-in-law left Germany in 1919, she preferred to stay in Berlin with her children. William was allowed to return in 1923 but their relationship was finished and they only met for official occasions such as family weddings and similar events. Cecilie was active within several charity and royalist organisations until all private organisations were taken over by the Nazi party in 1933. During 1933-1945, she lived a private life on Cecilienhof in Potsdam, where she hosted concerts, several of them conducted by famous musicians. In February 1945, she left Potsdam to escape the Soviet army and moved to Bavaria. She lived in Bad Kissingen and 1952-54 in Stuttgart before dying of a stroke.

She was very attractive as a young woman (though she grew matronly quickly) and she and Willy were quite the 'bright young things' of Berlin society. She had lovely large dark eyes and thick hair which lent itself well to the hairstyles of the day. 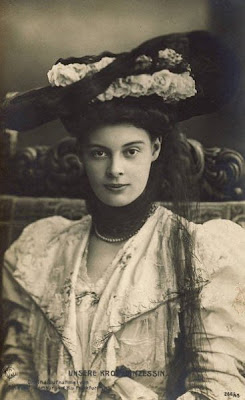 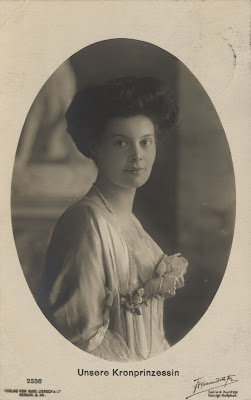 She apparently was a fashion trendsetter in Berlin society with an especial flair for hats. She also seems to have been of above average height. She was also a great favorite of her SIL Victoria Louise for her aide in acting as conduit in VL's 'Romeo & Juliet' romance with Ernst August of Hanover. 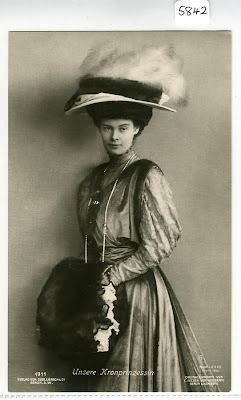 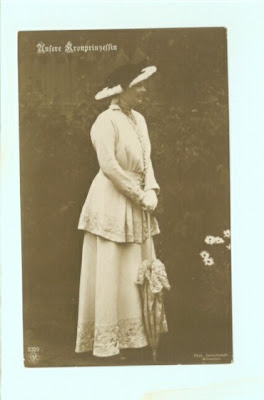 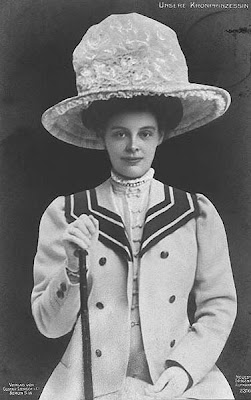 She was an avid sidesaddle rider, photographed often atop an obvious favorite personal mount. Sadly I could not find any specific information on the 2 horses she rode. 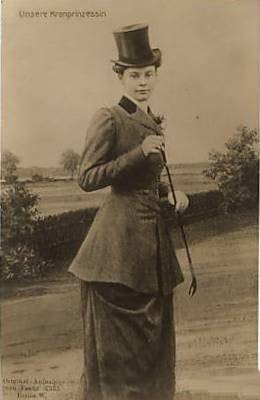 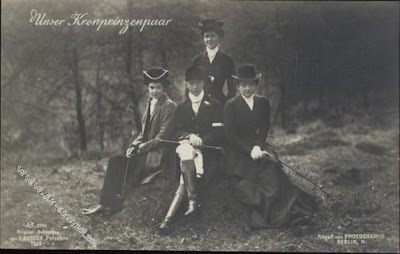 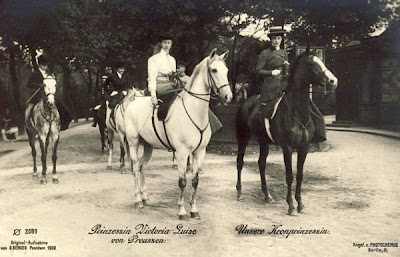 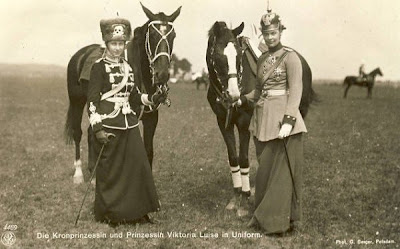 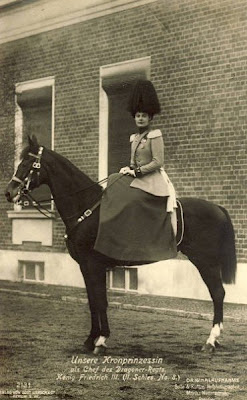 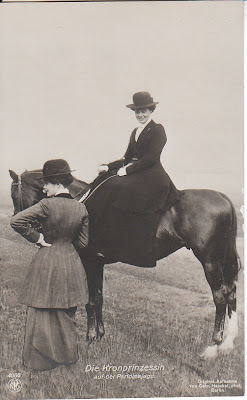 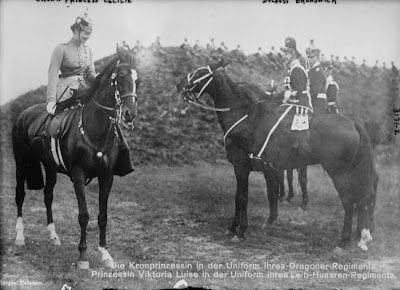 She matured a lot faster than Willy though as she had children and devoted less time to fast-living. 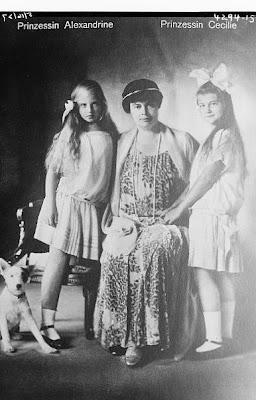 These family photos of Wilhelm Jr. give us a glimpse of Cecilie sharing her love of horses with her children. 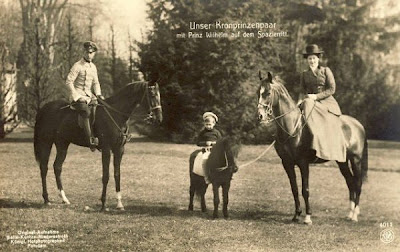 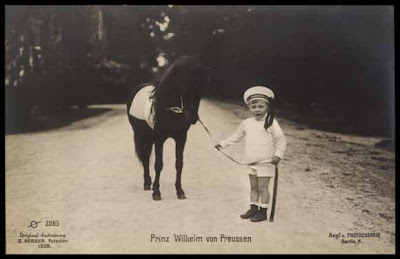 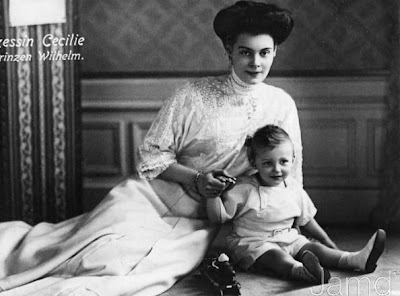 She was ahead of the curve in her dealing with her daughter Alexandrine who had Down's Syndrome. Cecile took care of her rather than sending her off and Alexandrine was always shown in family photos--including ones for the public. 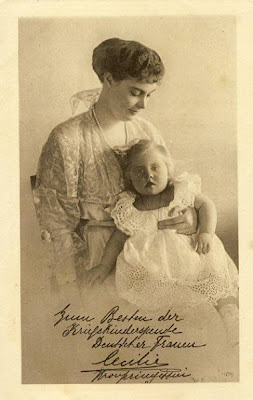 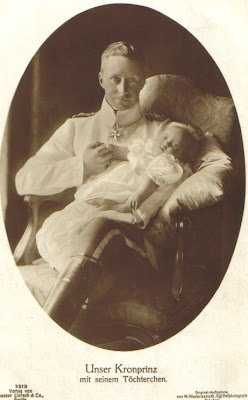 She was very active in the Red Cross and other wartime charities and was allowed to remain in Germany after the Revolution. She also spearheaded a group whose cause was the prevention of cruelty to animals. Her sister was Queen Alexandrine of Denmark and they remained close throughout their lives despite the separation of war. 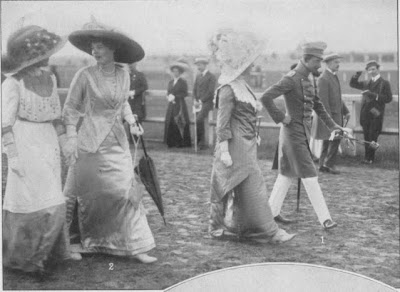 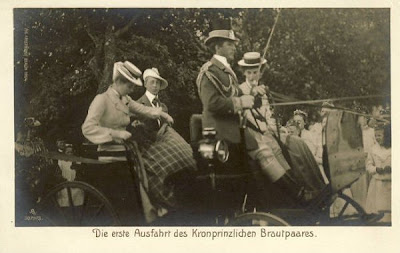 Crown Princess Cecilie wrote a book that I would love to read. It was published in German, however I read that it was republished in English at a later date.. but sadly I have not been able to locate it anywhere!

Very neat! I love when you do posts like this. So interesting.

Thank you for posting this!