First Ride Aside on Ace. 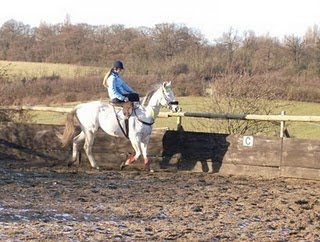 December 2009
The run-up to Christmas was a gloomy time for us. I’d lost Izzy, my Mum was laid up in bed with a leg injury and my 91 year old grandmother was in the hospital. Life went on, however. It had to with two other horses to look after. Rosie is a dun Welsh section C, rising 21 (behaves like a 2 year old) and Lexie – full name Shinglehall Casino, was almost 2 – behaving like a 21 year old regarding manners and sense! Lexie was bred locally near Epping by Karen Phillips; Shinglehall Senator is her sire. I bought her as a young foal with the main intention of eventually competing her under side saddle; the more she grows (16.2 already!) the more I am certain she will look magnificent as a lady’s hunter. While Lexie is lovely, I needed a horse to ride, so the hunt was on to find one.

Mum was stuck in bed but she could still use the telephone, so while I did the search through Horse & Hound she did the “Hello, I believe you have a horse for sale?” routine.

Another problem. Snow – the bets were on for a white Christmas. Fortunately, the roads were clear, so Dad and I went to see Split the Aces. I liked him. I bought him – subject to vetting.

On Christmas Eve Mum was finally able to get out of bed, albeit with the aid of crutches. She went to see Nan in hospital in the afternoon but Nan passed away in the early hours of Christmas morning, so our day was not very cheerful. A sad end to a bad month. We were, I have to say, glad to see the back of December.

January 2010
The snow eased between Christmas and New Year, Ace passed his vetting, so again Dad and I went to Watford, this time with the horsebox.

The one thing I hadn’t tried was the side saddle. I had intended to go back and ride Ace again before finalising the deal, the second time with the side saddle, but the weather had been so appalling, and what with funerals and such to arrange, I did not have chance.

I let Ace settle in for a few days, then Mum groaned her way into the car and hobbled across the yard to the ménage while I saddled Ace for the first time in my nice Champion and Wilton Saddle – which fitted him fine. I mounted from the mounting block and put him through his paces. I believe ‘like a duck to water’ is the expression. He was a little uncertain for the first ten minutes, but riding aside is not all that different to astride. The leg aids on the off side are indicated by a long riding cane or schooling whip. Trot, canter, both were fine. He was willing and I think, enjoying himself, we even popped over a small jump.

All I had to do was to get some muscle tone on my new boy, as he had very little top line: no good for the show ring.

Problem. Remember all that snow just after Christmas? The frost, the ice? How it lingered and lingered. For weeks the ménage was frozen, as were the Forest paths. For a few days the horses had to stay in, it was impossible to get them to the fields. Bang went my planned fitness regime. January had turned to February by the time I could start riding properly, astride and aside.

February
At last. The thaw. Jo came to give me a lesson. immediately liked Ace and could see why I had bought him. We had a good lesson. I have two faults. One I keep looking down which then rounds my shoulders and spoils my position and I ride short. I always have done, possibly because I have one leg shorter than the other.

Jo convinced me to have a go at a local show, so the end of February saw me at Brooke Farm, Stapleford Abbotts, riding aside in the Riding Horse Class. It turned out to be a most eventful day! 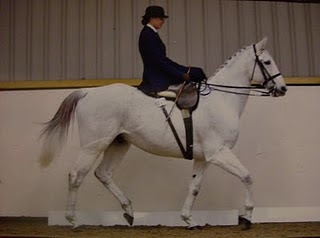 Email ThisBlogThis!Share to TwitterShare to FacebookShare to Pinterest
Labels: Biography

What a beautiful turnout and Ace certainly does look like a natural under that side saddle!