Marcel's papers demonstrate a rather sad fact of the life of a show horse. Pam is number 10 on his list of owners. July 2006 they had a special private celebration together. Pam had officially owned Marcel twice as long as any other person in his life! This goes a long way in explaining why he wasn't friendly the first time they met. 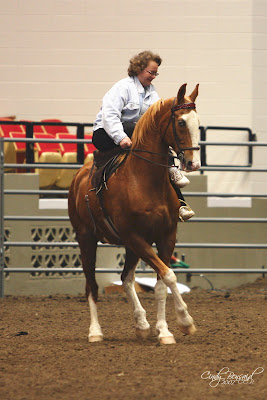 "Marcel is of the mindset that he should retire but I won't let him. We still have more to do!" Pam said "I think Marcel is a goodwill ambassador for former performance Saddlebreds and he is one fine representative of his breed! We may not show saddleseat anymore. but he's still and always will be an "A" class horse!"

Now one of the more senior horses at the barn, Marcel appointed himself "Barn Administrator, Equine Division". He took it upon himself to know which horse was suppose to be in which pasture and which human belonged to which horse. A friend of Pam's said, "If you aren't the right person taking a horse out of his pasture, you need a hall pass to get by Marcel."

But Pam adds,"Marcel will herd the correct horse to the gate when an owner comes out."

Two vets worked on Marcel through the day, but by late afternoon they knew it was time. Marcel was put down up the hill from his barn.

Without being asked, the barn owner said he could be buried on the farm where he had lived the longest. He now rests on the highest point of the farm. Pam said to her sister Lisa he didn't really have a connection to the spot.

Lisa told her, "It's the perfect place for him. He can see the whole farm from here and always watch over the other horses." 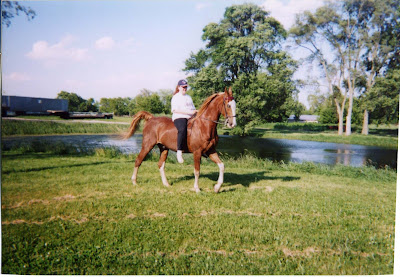 edited to add:
Here is a link to another write up about Marcel.
http://themanepoint.blogspot.com/2008/11/farewell-to-friend.html
Posted by Julie at 8:22 AM

Email ThisBlogThis!Share to TwitterShare to FacebookShare to Pinterest
Labels: Interview With an Aside Rider, Marcel and Me

oh thats so sad! I loved the story!

Wow, what a story. I think the hardest part of owning a horse is that dreadful day when the end comes.
But then comes the relief in knowing their pain and suffering is over, and the joy that they had a good life (with you anyway) and died happy......

I loved this story -- I agree with Hosanna it is the hardest part. I think the best part is the feeling that when you bring a horse into your life -- you make the commitment to have them for the rest of their life.

When I went to college I thought for sure I would have to sell my childhood horse. I wrote the ad -- sick to my stomach -- brought it into my parents (not horse people themselves) and they said "sell him? he's part of the family we can't sell him" The happiest words I have ever heard. He lived until 36 (?) and did not look a day over 18. I thank God everyday for my folks -- for my horse and the life lessons they provided.

RIP Marcel, I'm glad he happy days at the end.

That is sad but wonderful that he had such a great last few years. I feel I did the same for my old mare Naigen.

OMG I was not expecting that last chapter...Marcel had a good life with Pam. I am happy they had each other and the story has been great, it made me laugh and it made me cry. But I suppose those are too great elements for a story. A good story should always evoke some kind of emotion...
Karen