What Would Jane Austen Wear?

Jane Austen (16 December 1775 – 18 July 1817) was an English novelist whose works of romantic fiction, set among the landed gentry, earned her a place as one of the most widely read writers in English literature, her realism and biting social commentary cementing her historical importance among scholars and critics. 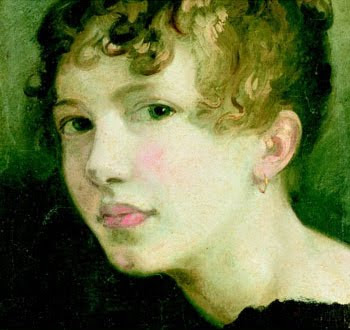 Austen lived her entire life as part of a close-knit family located on the lower fringes of the English landed gentry. She was educated primarily by her father and older brothers as well as through her own reading. The steadfast support of her family was critical to her development as a professional writer. Her artistic apprenticeship lasted from her teenage years until she was about 35 years old. During this period, she experimented with various literary forms, including the epistolary novel which she tried then abandoned, and wrote and extensively revised three major novels and began a fourth. From 1811 until 1816, with the release of Sense and Sensibility (1811), Pride and Prejudice (1813), Mansfield Park (1814) and Emma (1816), she achieved success as a published writer. She wrote two additional novels, Northanger Abbey and Persuasion, both published posthumously in 1818, and began a third, which was eventually titled Sanditon, but died before completing it.

Austen's works critique the novels of sensibility of the second half of the 18th century and are part of the transition to 19th-century realism. Her plots, though fundamentally comic, highlight the dependence of women on marriage to secure social standing and economic security. Her work brought her little personal fame and only a few positive reviews during her lifetime, but the publication in 1869 of her nephew's A Memoir of Jane Austen introduced her to a wider public, and by the 1940s she had become widely accepted in academia as a great English writer. The second half of the 20th century saw a proliferation of Austen scholarship and the emergence of a Janeite fan culture.

Riding side-saddle was the leisure activity of the ladies of the upper classes, since horses were expensive to purchase and maintain. Horses and ponies that carried ladies were chosen for their sweet tempers and docile natures: they also needed special instruction in how to carry their riders in a side saddle.

The female rider was decked out in a formal riding habit. These fashionable costumes changed noticeably through the years. “Around 1785, the riding coat (later redingote) appeared with its close-fitting bodice, double or triple cape-collar in the style of a coachman’s coat, and a buttoned skirt. At the end of the century styles changed again and by the early nineteenth century a less voluminous habit became fashionable, with a high waistline and often a pleated jacket back, using materials such as fine wools or nankeen in the summer (there is also some evidence for velvet). The style lasted through the Regency period but began changing dramatically after the 1820s, when skirts became fuller again, and sleeves puffed.” (The Side Saddle Lady Museum) 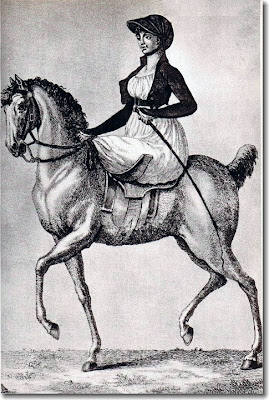 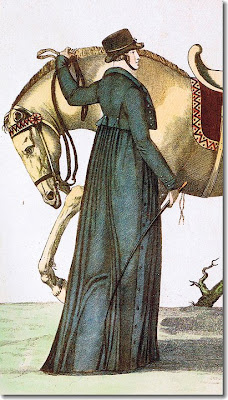 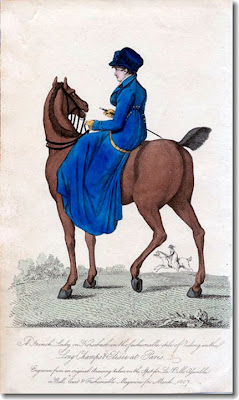 Notice the very dangerous band around her thighs.. meant to keep her skirt from flying up.
Posted by Julie at 11:14 AM